Originally, the lamp Bouillotte was created for playrooms, and it takes its name from a card game, La bouillotte.

Caricature of Napoleon 1st involving a game of Bouillotte (1815).

The Bouillotte is a French card game that appeared in the 18th century and is based on three of a kind.
It was very popular during the French Revolution and again for a few years from 1830.
It was then also popular in the United States. 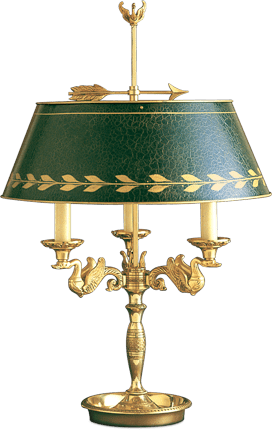 It was in fact placed in the center of a pedestal table, with a marble table top, designed to practice the "game of Bouillotte".
With its notched bowl-shaped base, players could place their pawns on it.
It is therefore the need to make objects as practical as they are pleasant that has made it so successful. 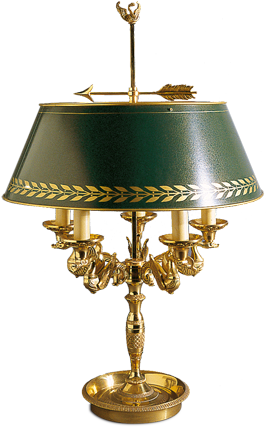 It is made up of two or three candlesticks, sometimes four, but this is much rarer.
In order to bring the shade up to the height of the candles, the size of the hot water bottle lamp is adjustable by a screw system.

This is a "short" lamp model: its painted sheet shade is in fact located quite close to its base.
This in fact allows to diffuse a very subdued light.

The Bouillotte lamp was most often fitted with a bowl-shaped base intended to receive, with each hit, a small portion of the tokens which were generally intended for house staff at the end of the game. The period models are in bronze or silver.