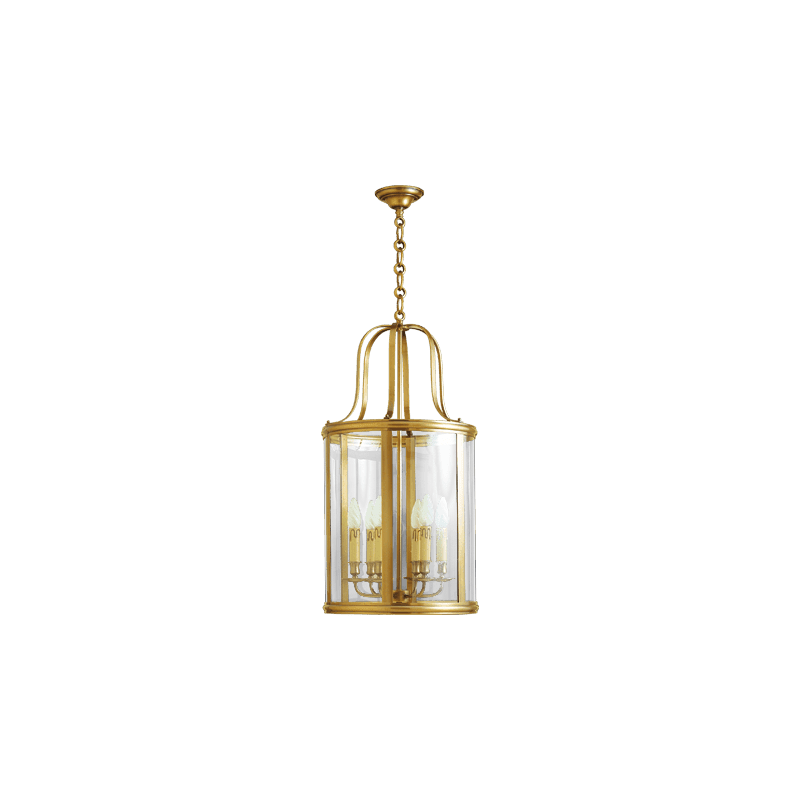 Here is the big model 6L of lantern Lucien Gau, which will showcase a corridor, a room or an entrance.
The golden finish of its bronze uprights, the purity of its curved glass, will delight lovers of exceptions lighting.
The Lucien Gau house is entirely crafted and is rich in know-how transmitted from generation to generation since 1860.

You can choose between two finishes:

DELIVERY TIME : BETWEEN 2 AND 8 WEEKS (stock managed by the supplier)

Prior to improvisation at the guillotine site, such as the one in Place de Grève during the French Revolution, the lantern is an advancement brought about by La Reynie to provide weather resistant public lighting to the streets or a lamp to help locate coaching inns and hostelries during a journey. Within the blink of an eye, this cylindrical or hexagonal innovation is to be found in porches and at the entrances to buildings.

Historical Center of National Archives. Section of the XIXth century

Public lighting originated in the order of January 1318 which requires the clerk of the Chatelet de Paris to watch over a candle during the night, in front of the door of the building which served as a court and jail. Despite attempts to generalize the use of public lanterns, it was necessary to await the ordinance of 2 September 1667 for Paris to be fully enlightened. To celebrate this event, in 1669 Louis XIV caused a commemorative medal bearing the motto "Urbis securitas et nitor" (the security and clarity of the city). As of this year, there are nearly three thousand lanterns; In 1729 there were twice as many. But this illumination is still insufficient, and in order to palliate it, the tradition of the lantern carriers is perpetuated in Paris. Nevertheless, there has been significant progress in lighting in the mid-eighteenth century with the gradual replacement of lanterns by oil lamps. These luminaires were suspended in the axis of the tracks by means of cables; A system of pulleys made it possible to bring them down at hand. Lanterns are subject to very precise regulations: 18 inches (about 50 cm) high and 8 cm (about 22 cm) wide, they have the shape of an elongated sphere, are made up of small pieces of glass joined by strips of lead And provided with a candle. Clerks are instructed to light and maintain them.

Originating with Charles Gau in 1860, the LUCIEN GAU firm, Founded in 1934, benefited from the savoir-faire of several generations of Parisian fine bronze-smiths.
Today Lucien Gau is one of the leading European names in lighting and is active on markets in more than 30 countries world-wide.
A production plan at Melun near Paris FRANCE covers an area of 5,000 m² and groups all the phases of fabrication from transformation of raw materials to packaging and dispatching, making any type of décor.
A integrated design office and prototype studio enable Lucien Gau to handle original designs or restoration of period pieces, and to collaborate with creators, decorators and architectural firms.
Les Styles comprises over 2000 original models in traditional sand-cast bronze with hand-worked patina. There is also an important range of light fittings that use
bohemian crystals or strass. 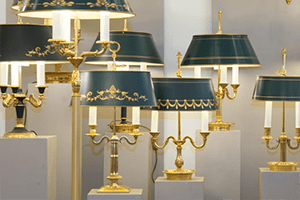 Lucien Gau Bronze lantern with three lights and glass base 16303